I sometimes get the worrying feeling that nineteenth-century men preferred their women to be dead than alive. There is something archetypal about the repeated vision of the pale, beautiful, fragile, utterly feminine corpse. Beyond corruption, a woman who's died is a woman you can safely worship without any danger that she'll ruin the image by doing something vulgar like using the wrong form of address to a bishop, or blowing your best friend. It's a vision that crops up everywhere in the works of these fin-de-siècle writers, who were unhealthily obsessed with Edgar Allen Poe and with the figure of drowned Ophelia (for them, more Millais than Shakespeare).

Bruges-la-Morte (1892) is the apotheosis of this kind of preoccupation. As my introductory para suggests, I find the general mindset a little problematic, but this is certainly a beautifully-written distillation of the theme. Hugues Viane, our melancholy hero, settles in Bruges after the death of his wife, and prepares to live out the rest of his days nursing his memories of her: he dedicates a room of his house to her portraits, and preserves a lock of her hair in a glass cabinet.

When he's not staring at her pictures, he's out taking moody walks along the canals.

Where, one day, he sees a woman in the street who looks identical, in every detail, to his dead wife. Is it a ghost? An appalling coincidence? His mind playing tricks on him?

And might it be somehow possible to recreate his lost love…?

Viane is the main character; but drizzly, grey Bruges is the real hero of the book. The city is portrayed as the necessary complement to Viane's feelings of loneliness:

The point is underlined by the inclusion of a number of black-and-white photographs of the city, looking still and silent, and often including unidentified figures. A modern reader can't help seeing the effect as Sebaldian. 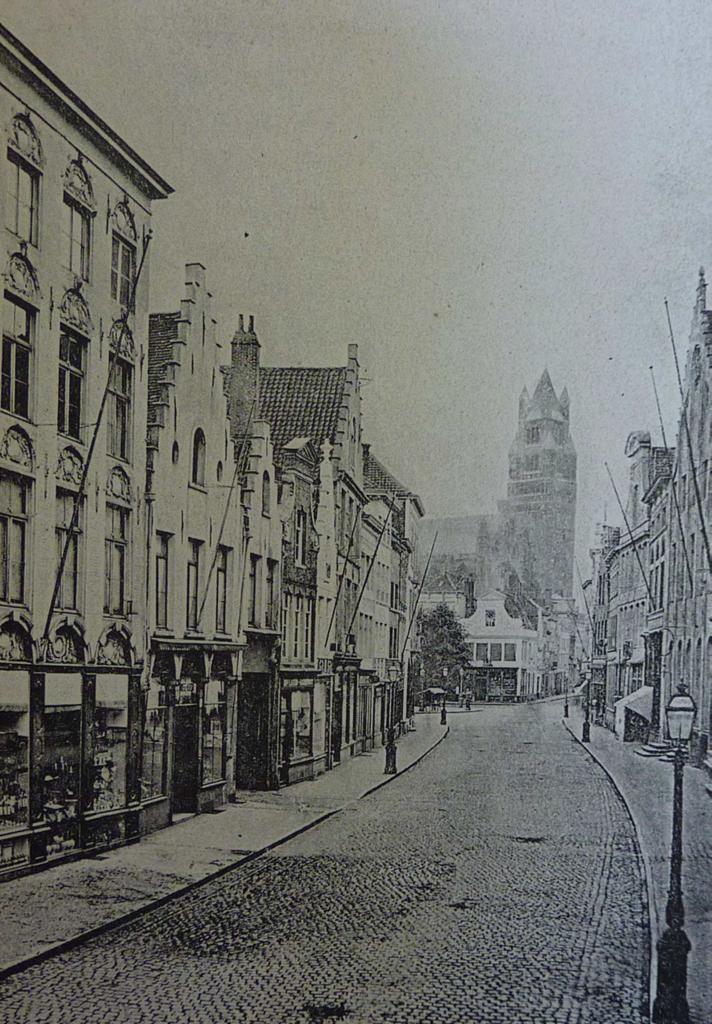 But anyway, however interesting this early use of photography may be, the real star is Rodenbach's prose. He finds a thickly atrabilious style to fit his story, rich in imagery, full of strikingly depressive turns of phrase. The city's canals are ‘cold arteries’ where ‘the great pulse of the sea has stopped beating’; the famous Tour des Halles ‘defends itself against the invading night with the gold shield of its sundial’; down below there are streetlamps ‘whose wounds bleed into the darkness’.

This must be what people mean when they talk about ‘prose-poetry’. There are some paragraphs here that seem to be made up entirely of alexandrines. And then just look at a phrase like this:

There is a progression of vowels here that slides forward through the mouth beautifully, ending with the wonderful dirge-like assonance of allongent and ombre; and the consonants travel too, from the silent h of haut, back in the throat, forward to the t of tours, on to one lip with the f of frocs, then both lips for the two ps, and finally the lips are pushed right out for the last two nasal vowels. Wowzer! (Translation: something like: ‘Everywhere the high towers in their stony habits stretch forth their shadow.’)

Earlier this year I read Nerval's Les Filles du feu, and I kept being reminded of it while I was reading Bruges-la-Morte. There is exactly the same fascination with the ‘doubling’ of a love interest: one woman becomes two (or more), each taking on different attributes – one is blonde, the other dark, one is pure, the other degraded, one is a virgin the other is a whore, and so on. Some scenes, some lines, are almost identical: Rodenbach must surely have been a Nerval fan. He sums up the poetic essence of this tradition perfectly – indeed so perfectly that I found the formalities of plot resolution at the end of the book to be irritatingly drab and melodramatic by contrast. I guess that's the problem with turning poetry into a novel.

Nevertheless, Bruges-la-Morte is obviously a high point of Symbolist writing, a book that's obsessed with death and always alert to new ways to externalise deep emotions. There is a brooding openness to the supernatural, and a looming architectural presence, which also has clear links with the Gothic. But more importantly it's just beautifully-written: every sentence drops balanced and gorgeous into your head.

For best results, it should be read at dusk, preferably when it's raining outside. Just make sure you have a brisk walk afterwards.