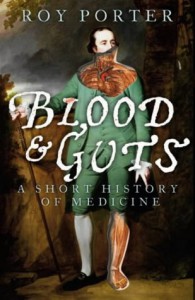 This is one of those ‘surrogate’ books – I bought it because I really wanted something else, so any disappointment is my own fault.

The book I wanted was Porter's The Greatest Benefit to Mankind, his mammoth tome on the history of medicine, but my friendly neighbourhood bookshops never seem to have it when I'm in the mood. Instead, I bought this, which I thought might tide me over.

To be fair, the clue is in the title. This history of medicine really is short – if you take off the notes, bibliography and the many full-page illustrations, you're left with barely 150 pages of text. (Edit: I just counted, it's actually 130.) Like a literary amuse-bouche, I thought it might whet my appetite for the bigger version (excuse the dangling modifier), but despite the clear labelling I unfortunately found it more frustrating than stimulating.

The approach is thematic: eight chapters, each dealing with a different aspect of medicine, including disease itself, anatomy, surgery, the hospital, and so on. So we have a score of pages on each, running very briskly from antiquity to now, before resetting the clock again at the start of the next chapter. Porter's prose is as wonderful as ever, and his conclusions typically judicious. But the frenetic pace doesn't show off his talents to best effect, and the merciless effort to pare things down to the essentials means there's little room for all the grisly anecdotes of mediaeval births and eighteenth-century amputations that you want from something like this.

My preconceptions aside, this is a solid grounding in the story so far, and it will bring you up to speed. It will also have you thanking all the gods, once again, that you were born in the era of anaesthetics and antibiotics (although, as always, you can't help wondering what future generations will consider appalling about our own time).

It has some interesting things to say about modern medicine too, especially the drive towards healthcare-as-business in the US: I was amazed to read that one head of the Hospital Corporation of America was a former fast-food manager who said approvingly that ‘the growth potential in hospitals is unlimited: it's even better than Kentucky Fried Chicken’. ‘In the USA health insurance became a lasting political football,’ Porter comments mildly in 2002. (Oh Roy, if you only knew.)

Porter is surprisingly ambivalent when it comes to giving an overall verdict on modern medicine, taking the view that improvements in life expectancy and pain relief are offset by commercialisation and a dubious record in how well western techniques have been exported to the developing world. (That is, investing in basic hygiene and nutrition might have been better than exporting expensive pharmaceuticals.)

I can't give this less than three stars, because the facts are all there and he writes beautifully. Unfortunately, the fact is that I wanted a lobster thermidore and I ended up nibbling a breadstick.