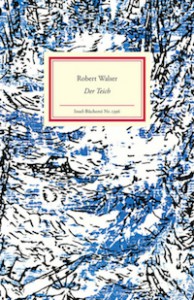 The Swiss writer Robert Walser, who has become something of a rediscovered literary darling in recent years, notoriously avoided writing anything in Swiss German, considering this to be eine unziemliche Anbiederung an die Masse, an unseemly pandering to the masses. This brief play, not performed or published in his lifetime, is the one exception. It was written in 1902, when Walser was in his early twenties, staying in a little village on Lake Biel near his sister, and not published until 1972 as part of his Gesamtwerk.

It therefore has its linguistic interest, but as a play it's a bit cringeworthy and – Walser's feelings about dialect notwithstanding – you can see why he never tried to do anything with it. In some ways it's exactly the kind of plot you'd expect a young, artistically-inclined loner to write: a young boy who feels no affection for his family and thinks they don't appreciate him pretends to drown himself in order to make everyone realise how great he was after all.

Annoyingly, instead of slapping some sense into him, they react more or less as he hoped, with his mother immediately swearing her devotion to him:

My boy, my boy, what are we going to do? Do I really need to fall to my knees before you? Do I? Oh, I have done you a great, great injustice. But I shall make it right.

Bleurgh. This maternal reconciliation scene becomes so florid that it edges into Oedipal territory, though perhaps I am misunderstanding things.

This particular edition, part of the appealing Insel-Bücherei series, is beautifully done, with some illustrative woodcuts and an afterword from someone at the Robert Walser Centre which makes a lot of rather grandiose claims for such a minor piece of juvenilia. There is also a translation of the text in Standard German, which was a big help to me at several points (though Swiss GR friend Isabelle says that in literary terms the German version is a disaster).

Basically it's forgettable; a nice curio for Walser fans at best, and one that can at least be read comfortably in under an hour. Though I'm afraid it took me more than a month armed with a shelf's worth of Schwiizertüütsch dictionaries.